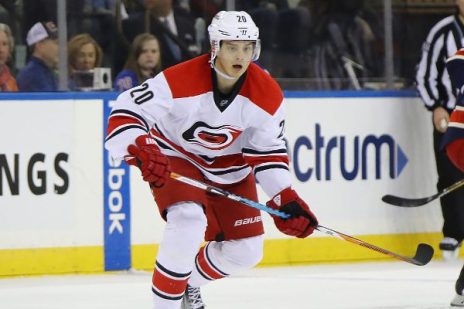 Auston Matthews continues to dominate the headlines but not many people know about Sebastian Aho, a young forward for the Carolina Hurricanes who has very quietly been turning heads. Aho is a nineteen year old Finnish player drafted 35th overall in the 2015 draft, which included the likes of current superstars, Conner McDavid, Jack Eichel, and Mitch Marner. He rose through the Finnish ranks very quickly and eventually turned into a 2nd round pick. He was overshadowed last year in the World Junior Championship by Patrick Laine and Jesse Pulljajärvi. Despite this, Aho still managed to put up 14 points in 7 games. This year he has 24 points in 44 games alongside line mates, Teuvo Terainen and Lee Stempniak. This kid can play solid in all three zones and create plays on the power play. He also has some moves in his arsenal along with being a versatile player that can be a center or a winger. Aho also has had a couple of head turning goals this season. Nevertheless, the most important thing about him is he is a proven winner. He has won gold at the U20 World Junior Championships and the SM-Liiga Championships. He also has a silver medal from the U18 World Junior Championship and a silver medal from a World Championship. Many players in the NHL right now cannot say that they had those awards at the age of 19. He has very quietly risen in the ranks of NHL rookies but remains underrated. He may not be a finalist for the Calder Memorial Trophy but he will be a huge key in the rebuild of Carolina. Aho is going to be around for a while, it’s just a matter of time before he becomes a household name.