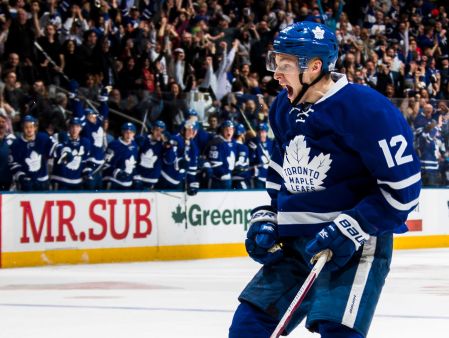 Game 7. Boston, Massachusetts. TD Garden. May 2013. The game was headed into overtime. The Toronto Maple Leafs had made the post season for the first time since the 2003-2004 season and their season was on the line in a game tied at 4. They were up four to one until they blew a three-goal lead in the third. At 13:55 left in the overtime period, Patrice Bergeron scored an iconic goal against James Reimer and the Leafs season was over. This goal has been ingrained into Leafs fans’ heads ever since. But now, it is the dawn of a new age. The Leafs are back in the playoffs and this young group of hockey players is hungry for more. These playoffs will be special for the club and their fans. It is the first time they have been back to the post season since that doomed game 7. This journey was a long one, so let’s go back and see how they made it to today.

Right after this heart-breaking loss, a lot of work had to be done. How do you move on from there? It was a tough question General Manager Dave Nonis and Head Coach Randy Carlyle had to answer. The upcoming summer proved to be a busy one. Their first-round pick in the NHL draft at 21st overall was Fédérik Gauthier. After that, trades for Jonathan Bernier and Dave Bolland were constructed. The brass believed that Bernier was an upgrade in net over James Reimer since Reimer blew a three-goal lead so late in a game and Dave Bolland provided leadership as a Stanley Cup winner, in addition to being a solid third line center. The pain still lingered but things were looking up and hope for a new season was around the corner.

The beginning of a new season was here and the Leafs hit the ground running getting twenty points in the month of October 2013. Things were looking good and the memory of last season seemed like it was fading away. However, during the next two months of November and December, the group took a step back by only acquiring  11 points and 14 points, respectively. January dawned and the group looked like it would shake the funk of the last two months by getting 19 points. They were sitting in a playoff spot and from the early looks, they were going back to the playoffs. Well, there is a reason why you play full seasons. The club would go on an unexpected fourteen game losing streak that would put them on the outside looking in when April rolled around. Once again, the Leafs brass were scratching their heads in shock and wondering what to do next.

More pain had hit the fan base than joy in the past two seasons and it looked like there was no end in sight for this organization. Brendan Shanahan was hired that spring as president of the club. He would oversee all operations of the organization but Dave Nonis remained as general manager to try and fix this club.  The next big step was the 2014 NHL draft. William Nylander was selected at 8th overall and was a controversial pick to many fans and experts. To some there seemed to be better players still on the board at eighth overall. That summer saw the Leafs getting Roman Polak and Martin Fratin in trades while shipping out Carl Gunnarsson to St. Louis. Dave Nonis made these trades in a final effort to get this team back into contention. It was a real band-aid fix and the results would be found out in the next season.

This was the make or break year for the core players on this Leafs team. Dave Nonis put his chips in and it was time to see if it would pan out. Throughout the whole 2014-2015 season, the team struggled to gain ground. Facing reality, fans realized that this team was not destined for the next round but only for more pain. Their 13-yearlong sell-out streak of tickets at the Air-Canada Center ended. In January, in one last effort to salvage something from this season, Randy Carlyle was fired. Interim head coach Peter Horachek was appointed to guide the team for the rest of the year but failed miserably as they played bad hockey down the stretch. The only bright spot during the season would be unloading David Clarkson’s contract. It was too much for this team to have on the books.  Yet, one day after the season was over Brendan Shanahan started to scorch the earth and start anew by firing Dave Nonis and company. It was time to clean house. Shanahan took control to stop the bleeding. The Leafs has sunk to a new low.

Once again, a major summer of overhauling was ahead with no end in sight. First thing first, Shanahan had to find a coach. It was the right year to be in the market since Mike Babcock, arguably the best hockey coach in the NHL, was on the market. Shanahan was able to sign him to a massive deal of 8 years, worth 50 million dollars. It was finally a first step in the right direction. Thanks to the lottery, the fourth overall pick was under their control. Mitch Marner was selected at fourth overall and what a pick it was. Not much later in the summer, the legendary Lou Lamoriello left the New Jersey Devils and signed as general manager of the Toronto Maple Leafs. They would acquire Martin Marincin from the Oilers while shipping out Phil Kessel to the Pittsburgh Penguins in return for Kasperi Kapanen, Nick Spaling, Scott Harrington and a set of conditional draft picks. This deal shook the hockey world and it signaled the start of a new age and core. They would go on to sign players like P.A Parenteau, Mark Arcobello, and Shawn Matthias to one year deals. Matthew Hunwick would also join with a two-year deal. They also acquired Michael Grabner from the New York Islanders in the fall. It certainly was a busy summer for the Leafs brass.

However, the 2015-2016 season was doomed from the start. Everyone on the team could or was expendable. The talent level compared to others was extremely low and it would set a franchise record of 53 losses in a year.  The captain Dion Phaneuf was traded to Ottawa and the fire sales continued with Shawn Matthias, Roman Polak, Nick Spaling, James Reimer, and Daniel Winnik all being shipped out in trades. They would acquire many picks and players during this season. The Leafs loaded up for the future and the rebuild was in full-swing. This season was the most painful for Leafs fans because of the sheer number of losses. It was a tough year to watch but it was finally rock bottom for the club.

For Leafs fans, the 2016 NHL entry draft is something they were waiting for after a very long season. They had the best odds to get the first overall pick and they did. The Leafs had finally won something. With that pick, they would take number 34, Auston Matthews. This was the year to get a high pick and the club had struck gold with getting the first overall selection. Later on, they would trade for Fredrick Andersen and sign him to a five-year extension at five million per season. They were not done there. Matt Martin was signed to a four-year deal at 2.5 million a year deal. Nikita Zaitsev was signed to a one year deal along with giving matching extensions of five years to Nazem Kadri and Morgan Reilly where Kadri would have 4.5 million per season and Reilly would make 5 million per season. Lastly, Jonathan Bernier was quietly shipped out to the Anaheim Ducks for a conditional pick and replaced by Jonas Enroth.  Big additions through the draft and trades made during this year looked like a step in the right direction but to most, not enough to get them back into the post season.

The 2016-2017 season would show more change. New uniforms and logo along with a new goal song showed the turning over of a new leaf was really happening. In his first game, Auston Matthews would score four goals against the Ottawa Senators and Mitch Marner would come flying out of the gate as well. Brian Boyle and Eric Fehr were brought in to help the post season push. Both of them are true veterans who have gone deep into the playoffs in the past couple of years. Curtis McElhinney was picked up off waivers from the Columbus Blue Jackets to fix the void in the back-up goalie position and would come up big late in the season. It was a bumpy ride for most of the year, but the Leafs soon found themselves in contention for a playoff spot. No one thought they would be this close to making it this year but rather, it would be more of a next step in the right direction. On the night of April 8th those expectations were exceeded with the 5 to 3 win over Phil Kessel and the Pittsburgh Penguins. All of the bad memories of the past four years were erased when the team made this year’s playoffs. It is so sweet for Leafs fans.  What a year it has been. Just living on a prayer, right? But during this season it was not just Auston Matthews and Mitch Marner. They get the majority of the credit but do not forget the others as well. Guys like William Nylander, Connor Brown, Zach Hyman, Nazem Kadri, Federick Andersen and many more all contributed to this team big time this year. It was a true team effort and it is just the beginning for this club.

So now what Leafs fans? Was all of the pain and waiting worth it? Just think about how good this team will be in the future. They have their cornerstone pieces and this organization is going to be the next dynasty of the NHL. Clearly the talent is there, the coaching staff is there, and a solid brain trust is in place. Everything is in line for this organization, one that has been without a cup for so long, to get one in one of these upcoming seasons. Or maybe is it this year? You just never know in the NHL playoffs. Anyone can win on any given day, and this group has a lot of people believing in them, including myself. Fans will still remember the pain of game 7 in Boston but the dawn of a new future will wash those memories away. The road has been long and painful for Leafs fans but the light at the end of the tunnel is here. Welcome back to the Stanley Cup Playoffs.

One thought on “The Long Journey Back Into The Playoffs”