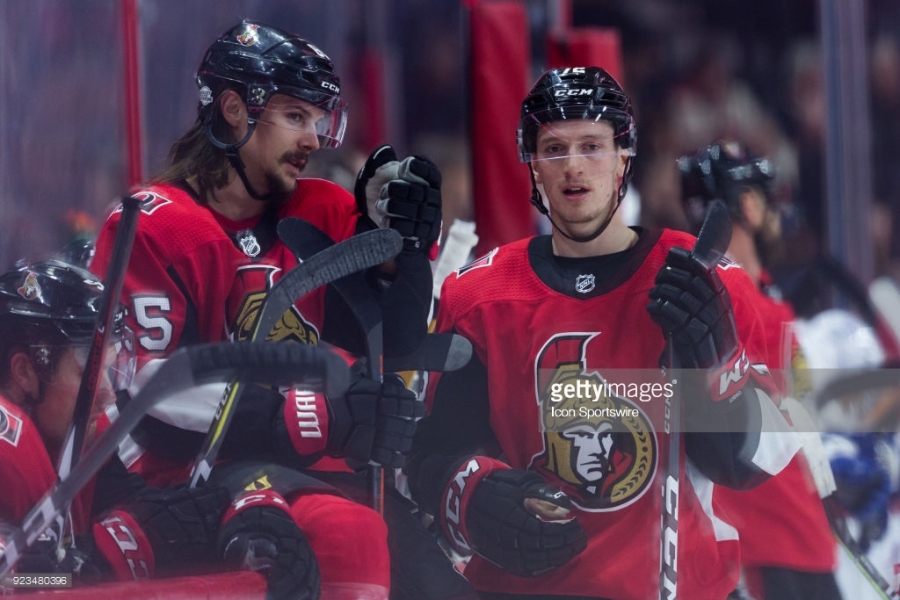 Thomas Chabot is one of the more intriguing players in our Eyes On series. The young defensemen had a difficult year with the Ottawa Senators. He ended up only playing 63 games with the Senators while spending the rest of his time this year with their AHL affiliate, the Belleville Senators.

With his time in the NHL this year, he put up 25 points and a +/- of a -12. For a rookie on a less-than-average team, those numbers are not too bad. If he can get more minutes and Marc Crawford gives him a longer leash, he should be able to take the next step in his development. Plus, if Erik Karlsson does decide to leave or gets traded, Chabot will be the player to fill those minutes.

One of Chabot’s biggest assets is his ability to move the puck quickly. During his junior days, he was able to move the puck out of the defensive zone. His first pass was always on point and in the style of hockey played today, this is a vital skill to have. To make the first right pass, it takes good hockey IQ. Chabot has that. It is very rare you see him make a mistake.

Another asset to Chabot’s game is his offense. He is a great quarterback for the second power-play unit. With the ease of his first pass, he can move the puck up quickly to big-name threats such as Mark Stone or Bobby Ryan. Even when walking the blue line, he has his head up ready to shoot or make a quick pass to roll out the top of the power play. Let’s look at the clip below.

Chabot takes the puck back and assesses the ice in front of him. He sees Dylan Strome on the other side of the ice. He quickly moves the puck to Strome and they enter the offensive zone. After this, he follows up the play. Chabot enters the zone with speed and takes ice.

He sees an open man and makes a beautiful pass. It was an all-around great play. This play shows off what kind of speed Chabot has. In today’s NHL, you need speed to compete. Speed kills and everyone needs it to stay in the league.

Chabot is motivated too. Any time there is an interview, he always says the right thing and shows a lot of maturity at such a young age. The best part is his motivation. He came up short of a gold medal at the World Juniors and came in third at the Memorial Cup in the 2016-17 season.

That is tough to deal with as a young player. Chabot has said all the right things and wants to win. Motivated players that have the drive to win can help change the culture. With the darkness that surrounds this organization, they need more players with the attitudes just like Chabot.

If Erik Karlsson decides to leave at the end of the year 2018-19 or gets traded sometime soon, Chabot will be the man to fill his shoes. He has the offensive skills to guide this team from the backend. The key to his development is more playing time. Playing time and playing with the right partner to complement his skills will really take his game to the next level. Once he gets to that level, there will be no stopping Chabot. Given the right development, he could easily become a true number one defensemen.